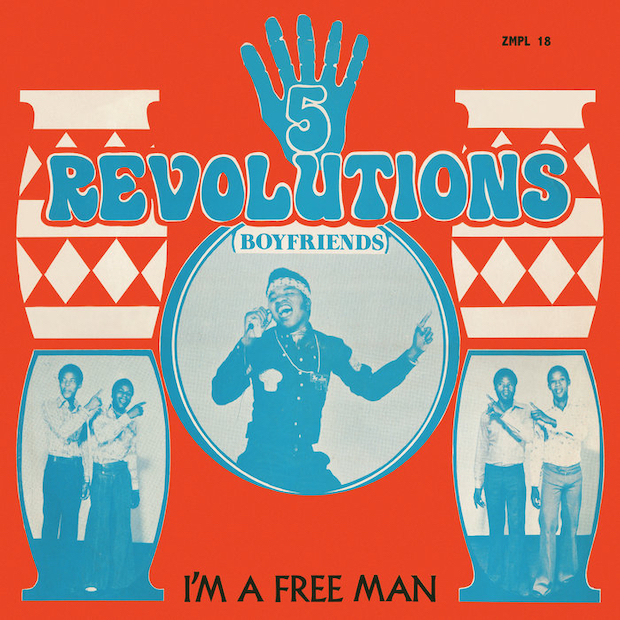 Alongside Tinkles and Blackfoot, 5 Revolutions was one of the core groups in the Zambia Music Parlour stable and owe their existence to the nurturing and support of Edward Godfrey Khuzwayo's Ndola-based label. The band produced a compelling trio of Zamrock titles as well as a litany of singles, rounding out their career in the 1980s as a kalindula band with the seminal release Kachasu Ne Ndoshi. From their gritty debut Boyfriends to the sultry Mrs. Brown, 5 Revolutions explored a singularly Zambian take on rock with their second album I'm a Free Man being the best starting point for those new to the band.
Hailing from Kitwe, 5 Revolutions emerged in the early 1970s after members of Morris Mwape's group Boyfriends migrated to the bands WITCH and Peace. Vocalist and lead guitarist Mwape responded by assembling a 5-piece follow-up with a fresh moniker alongside Abel Mukumbwe on rhythm guitar, Zion Lofwa on bass, John Chibuye on drums and Lovemore Sakala on percussion. Owing to the marketing cache of their original name, 5 Revolutions gave the title Boyfriends to their debut release of 1975 and nodded once more to their Boyfriends origins in parentheses in 1976 on cover of I'm a Free Man, which was designed by a renowned Zambian sculptor Flinto Chandia at the outset of his creative career.
While embracing the garage rock textures of overdriven guitars and washed-out organs, 5 Revolutions had little interest in remaining tethered to 4/4 rhythms but were less Pan-African than Musi-O-Tunya in respect to their black musical influences. Instead, they found a way of articulating an acutely Zambian rhythm in rock format and are attributed with creating the foundational template of kalindula. In a nutshell, roots kalindula played on traditional instruments in ceremonial settings migrated to the electric instruments of a stage band through the innovations of the 5 Revolutions. A case in point is the opening track of I'm a Free Man entitled “Mwapulumuka Kunjala Adaka,” which employs 6/7 polyrhythms and ends by evoking a village dance happening featuring celebratory whistles and the plucked single-note bass from which kalindula takes its name.