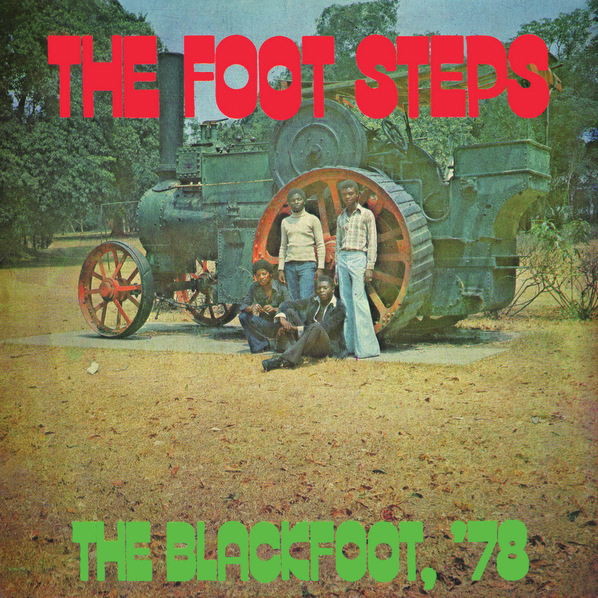 A1. The Footsteps (Bonnie)
A2. When I Needed You (Blackfoot)
A3. Send Me The Flowers (Bonnie)
A4. Washinga Here? (Fortune)
A5. Mwe Bafyashi (Bonnie)
B1. Jefferson (Bonnie)
B2. Pumpa Joe (Blackfoot)
B3. Lonely Highway (Bonnie)
B4. Sounds In My Sleep (Blackfoot)
B5. Kanyamawodi (Alfred)


Strawberry Rain Music:
The Foot Steps was the brainchild of legendary producer Billie Nyati, and the second and final album from Blackfoot. An essential Zamrock document and among the genre’s finest achievements. Plenty of incredible songs on here including “Lonely Highway,” “Send Me The Flowers,” “Mwe Bafyahi,” “When I Needed You” and many more.

SHARP-FLAT Records:
The album’s meandering title track, a signature Zambia Music Parlour instrumental album opener, was followed by a pair of songs reflecting the band’s collaboration with lyricist Davey Musopa, who lent an introspective poeticism to their new English offerings. Exploring his Zimbabwean roots, Fortune penned the Shona track “Washinga Here,” a cautionary appeal to a young woman on the verge of eloping, which features producer Billie David Nyati on vocals. “Mwe Bafyashi” in Bemba follows on its heels, instructing parents to keep children from drinking, smoking and misbehaving while side two unfolds with an English-language song cycle that negotiates influences as varied as Dylan, Creedence and the Velvets, closing with Alfred’s “Kanyamawodi,” a Nyanja dirge bemoaning greed and selfishness.