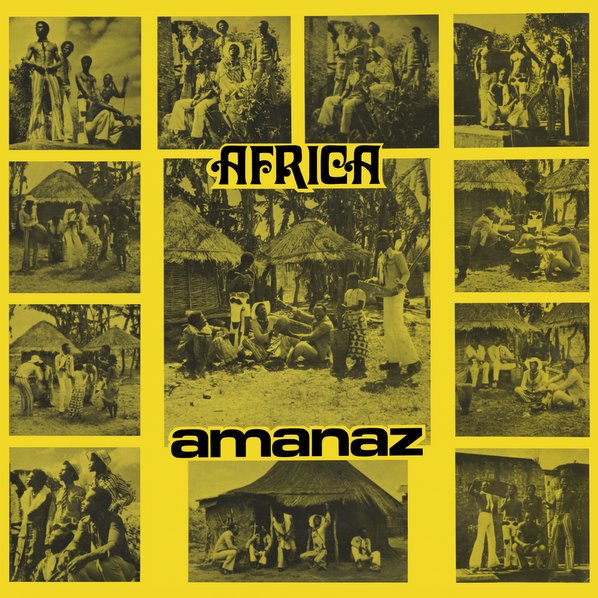 
Liner Notes:
Amanaz are a group of five. Namely, Keith Kabwe from the “Clusters,” which broke up in 1972. John Kanyepa from the “Black Souls,” which also broke up early in 1975 in Kitwe. Watson Lungu & Terry Mausala from “MacBeth,” which disbanded in 1973. Isaac Mpofu from the “Wrong Number,” which disbanded in 1973 in Kitwe. The band was formed in December 1973. Amanaz give their most thanks to Edward G. Khuzwayo, who sponsored the entire recording, and not forgetting Billie David Nyati, who assisted on behalf of Music Parlour Limited to arrange the songs during recording sessions.

Leonard Koloko (Zambian Music Legends):
This is a fuzz guitars and bass driven rock album which was released in 1975 and has since been reissued. Although the main title is “Africa,” it has nothing of the Africanised highlife and juju styles. Instead it has an internationalised style with certain African elements still being recognisable.

Strawberry Rain Music:
There are two original pressings of this album with completely different mixes. It’s an ideal blend of psychedelic rock and African sounds and somewhat original when you look at the Zambian scene as a whole. Maybe not the heaviest thing you’ll hear from Zambia but a great album none the less. It offers variety without losing the listener or the overall feel of the album. The original pressing has a little more separation and reverb compared to the reissue, especially in the vocals, but overall it isn’t the greatest pressing to begin with unfortunately. It seems the Zambian recording industry was hit or miss with its pressings and overall mastering. Really all over the map sonically as an industry, even within labels and individual bands.

Shadoks Music:
Amanaz was formed in 1973. Three songs are in the native language Bemba and nine songs are in English. Musically, it goes in the same direction as BLO, WITCH and Question Mark but this album is way cooler and stoned with amazing fuzz guitar all over, which sounds like an African version of early Cream. The cover makes it look very traditional but after a few spins you are aware that this one is very special. It’s so cool, so tightly produced and easy to compare with UK underground albums with a touch of African beats.

Now-Again Records:
Issued in 1975, this is the articulation of Zambia’s Zamrock ethos. While other albums – Rikki Ililonga’s Zambia, WITCH’s Lazy Bones!! – are competitors, it’s hard to best this album as it covers each major quadrant of the Zamrock whole: it came from the mines; its musicians were anti-colonial freedom fighters, it envelops Zambian folk music traditions, and it rocks – hard. Africa was issued in two separate mixes and two separate presses in 1975: one version is dry, with the vocals and drums mixed loud, the other slathered in reverb, with the vocals and drums disappearing into the mix, and with the guitar solos mixed much louder.